How to get to Andrew Jackson State Park

Andrew Jackson State Park is just 10 minutes north of Lancaster, SC and only 40 minutes south of downtown Charlotte, NC. The park itself is less than a mile from the state line.

Most visitors will arrive via I-77 and a short jaunt on State Route 5 before hitting US Route 521. Unless you intend to camp, you don’t need much more than a couple of hours here.

If you’re coming from further afield, like upstate South Carolina, the Lowcountry, or even just from Columbia, we recommend combining this park with a few others for a full day trip.

If you’re also working your way through every South Carolina State Park, the following are within an hour’s drive of Andrew Jackson State Park in South Carolina’s Midlands region:

How much does it cost to visit Andrew Jackson State Park? Do I need a permit?

Fishing is allowed in the park’s lake. A South Carolina freshwater fishing license is required.

Prices vary for a fishing license based on residency. Learn more from the South Carolina DNR.

Andrew Jackson was born and raised in the Waxhaws, a region that straddles both North Carolina and South Carolina today.

We still don’t know for sure exactly where Andrew Jackson was born, whether on a farm in South Carolina or in a cabin in North Carolina.

There was no state line to check against, at the time. Both states have since claimed to be the birthplace of Andrew Jackson.

Andrew Jackson State Park was opened in South Carolina in 1952 in honor of “South Carolina’s only President.”

It’s 360 acres includes the area that was once the Crawford Farm, where Andrew Jackson himself later claimed as his birthplace.

In 1962, famous sculptor and South Carolina snowbird Anna Hyatt Huntington was approached about creating a statue of Andrew Jackson for the park.

The Huntington statue, The Boy of the Waxhaws, was dedicated on Andrew Jackson’s 200th birthday in March 1967.

It also includes a lake, hiking trails, campground, and an amphitheater.

What to do at Andrew Jackson State Park

This park does a wonderful job of commemorating young Andrew Jackson and what his life would have been like, growing up in this area in the late 1700s.

>> There are plenty of outdoor things to do at this park, but the real gem is the Andrew Jackson Museum.

This was an unexpected surprise! The Museum at Andrew Jackson State Park does a good job of not only telling but showing what life was like in this area before and during the American Revolution.

The museum shows what a typical backcountry home would have been like, how residents would farm and make textiles, and how life changed when the British troops showed up.

In particular, it relates it all to Andrew Jackson: how he would have sat at a table like this one, helped his family farm crops like this, and discusses how the Revolutionary War impacted his family and his political views for the remainder of his life.

Don’t skip the museum! It was our favorite part of the park.

Peek inside a replica South Carolina backcountry schoolhouse from the late 1700s.

Teachers were hard to find in the backcountry. Schooling was usually nothing beyond learning to read and basic arithmetic for running a farm or business.

Andrew Jackson’s mother paid for a special school teacher to provide more advanced coursework, like Latin or Greek, to prepare him for a future career in law.

Admire the Statues and Memorials

The most famous statue on the property is Anna Hyatt Huntington’s bronze piece, The Boy of the Waxhaws.

Nearby is a plain stone monolith with a paragraph etched into the face, stating its assertion that Andrew Jackson was born on a farm here and grew up in the South Carolina portion of the Waxhaws.

Last but not least is a memorial marker to Andrew Jackson’s mother, Elizabeth Jackson, who raised her boys alone after her husband died. She was an ardent supporter of the American Revolution, doing her part where she could and taking care of sick soldiers.

All three memorials are in a row, near the Museum and Park Office. Be sure to check them out!

Reserve the historic Meetinghouse, Amphitheater, or one of the park’s three picnic shelters for your next event!

Picnic shelters are first come, first served unless you book a reservation in advance.

Both the Meetinghouse and the Amphitheater can be booked for larger events, with some supplies like tables and chairs provided by the park.

There are two hiking trails at Andrew Jackson State Park: the Crawford Nature Trail and the Garden of the Waxhaws Trail. Both are one mile loops and easy to navigate.

The Crawford Nature Trail is, honestly, uneventful. It begins at the main parking area by the Meetinghouse, crosses Old Church Road, and circles out and back through the forest before returning to the start.

We went in late April so the forest and everything in it was green, but there wasn’t anything noteworthy about the trail.

It’s possible something flowers at a different time of year, but otherwise this is just a quick walk through the woods.

The Garden of the Waxhaws trail circles the park lake. This trail is shaded by the forest which comes right up to the lake’s shores, except for one section near the pier.

The park map lists this as a moderately difficult trail, but we don’t think that’s really warranted.

The trail is always just steps from the lake edge and there are several spots to stop, sit, and enjoy the view. Watch for roots sticking up on the dirt trail. That’s it.

If you start this trail from the parking lot by the Museum and Amphitheater, take the gravel steps to the right of the Amphitheater to walk down the hill to the lake.

You could also take the wooden stairs at the back of the amphitheater if you preferred that to the larger gravel stairs.

Perhaps this is why the trail is rated moderate, but this is a very short section that can be avoided entirely if you park at the lake trailhead instead.

Andrew Jackson State Park has one campground that can accommodate both tents and RVs. All 25 campsites have water and electric hookups, although only 5 can hold RVs longer than 30ft.

Restrooms and showers are in the center of the campground loop, and a dump station is available.

A minimum 2-night stay is usually required. Weekends often book up a few weeks ahead, especially around holidays. Reserve your campsite ahead.

Pro Tip: The park’s only playground is located near the campground by the lake.

Fishing is allowed at Andrew Jackson State Park. The on-site lake is home to bass, bream, catfish, and crappie, according to the park’s website. Bream are catch and release only.

The lake has an accessible fishing pier, or you can set up shop anywhere along the bank.

Prefer to fish from the water? Rental boats are available, or you can bring your own non-motorized boat.

Rentals boats are currently $3/hour or $15 for the day from the park office.

This park lake is not big, but it could be a good workout for those that want to paddle for an hour or two. There is a small island in the middle, usually occupied by geese or other waterfowl.

Bring your own kayak or canoe, or rent a fishing boat from the office, and paddle around to your heart’s content.

Enjoy your brief getaway in the natural landscape of the South Carolina Midlands at Andrew Jackson State Park, just minutes from Charlotte, NC!

For a full day, we recommend some state park-hopping! Andrew Jackson State Park, Landsford Canal State Park, and Lake Wateree State Park are all close to each other.

Visit all three for a full day outside, more worth your time than day tripping to just one of these.

If you’re looking for more things to do in the area, here are some ideas: 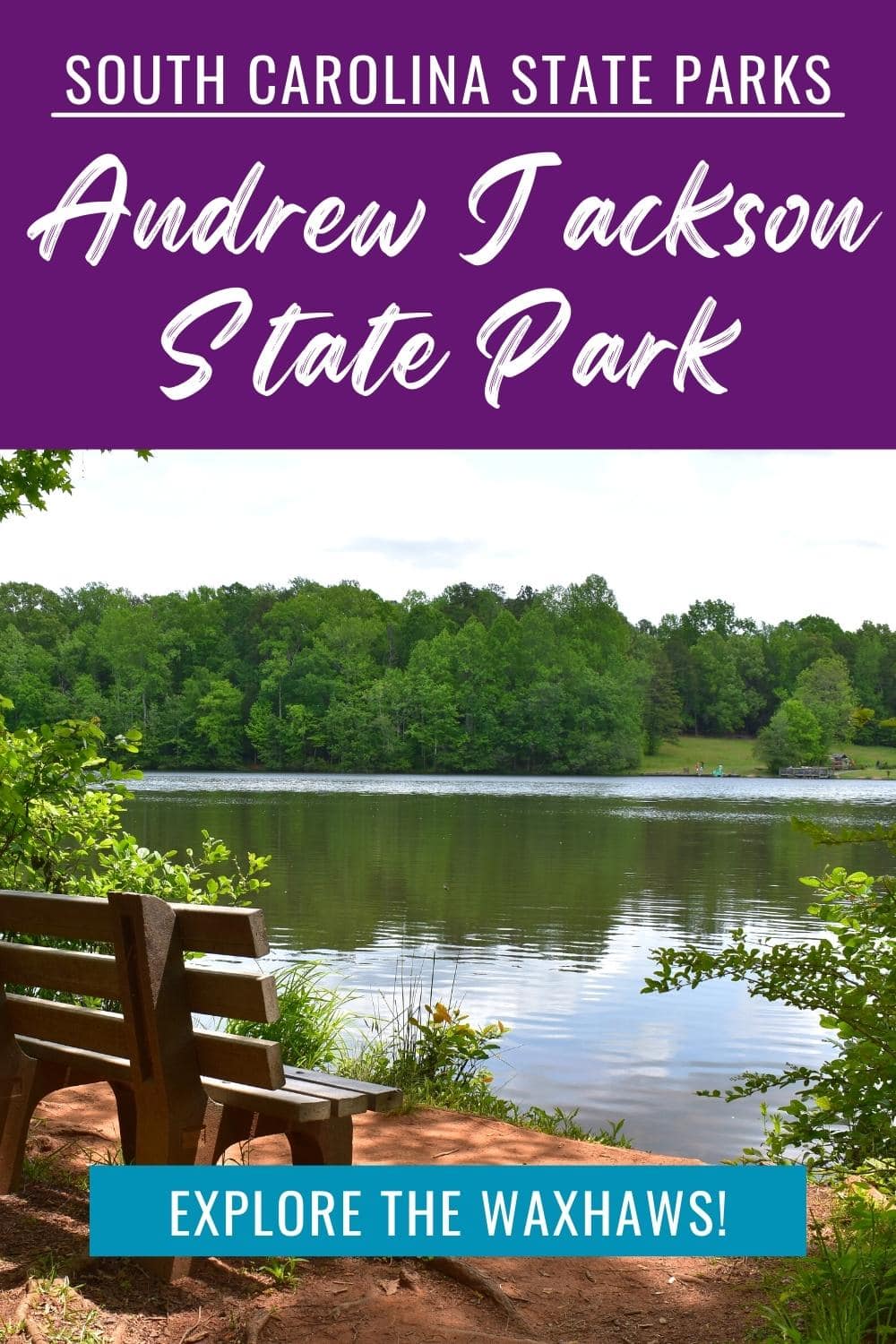 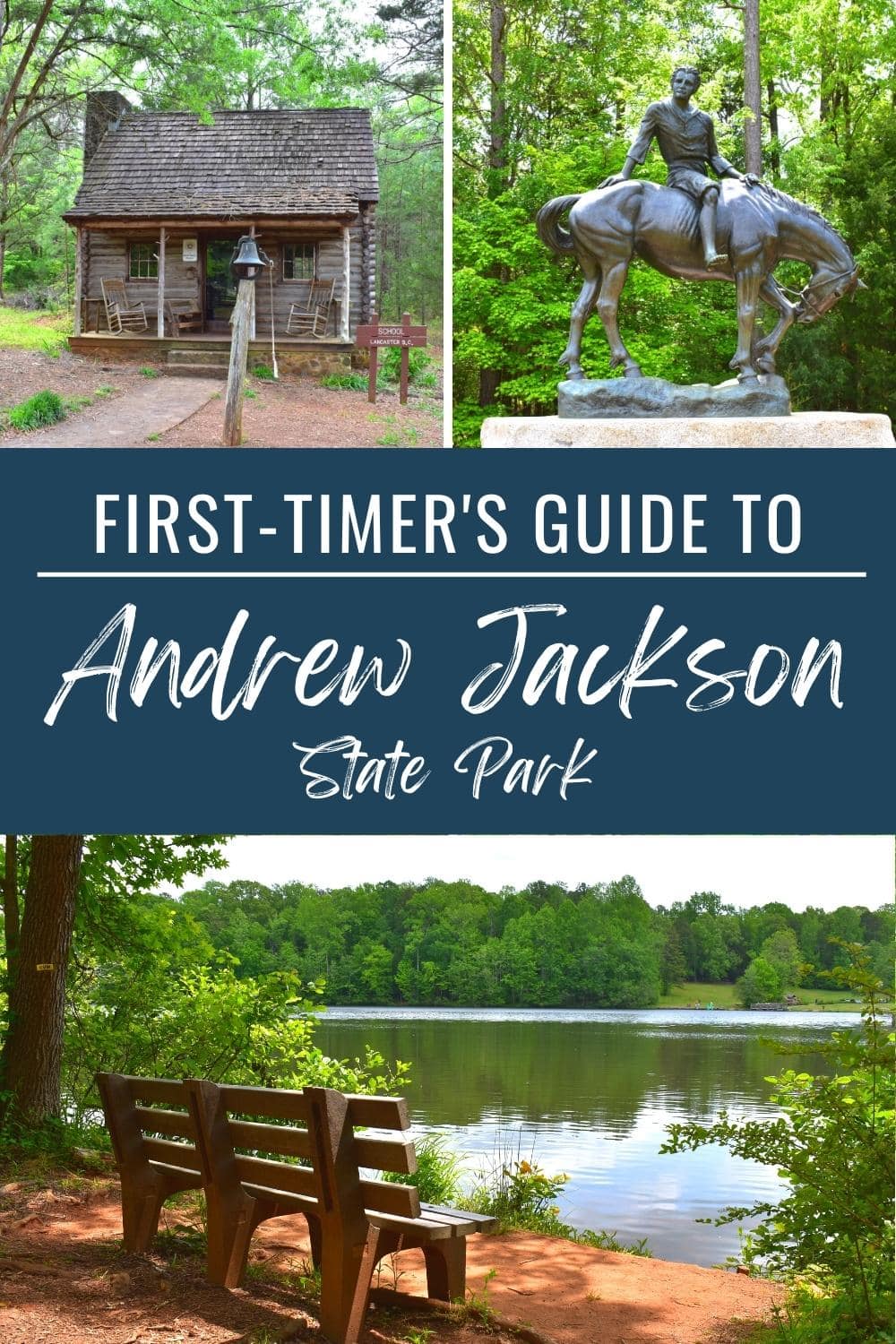