Presidents’ Day in the United States is a peculiar holiday. It’s one of those federal holidays that most people don’t get off of work, yet retailers use as an excuse to run a sale. If you are lucky enough to get the day off, you’ll likely find yourself wondering what to do. Embrace the intent of the holiday and learn more about former presidents! Touring a presidential home is a great way to celebrate Presidents’ Day.

When is Presidents’ Day?

Presidents’ Day is observed every year on the third Monday of February. Most businesses in the US do not observe every federal holiday, and Presidents’ Day is usually one of the first to get taken off the list.

Federal buildings, banks, post offices, and the New York Stock Exchange will all be closed. Some schools will get the day off, but many others won’t.

Retailers will all be open and almost every single one will have a sale.

When was Presidents’ Day established?

In the 1960’s, Congress passed the Uniform Monday Holiday Act in an effort to create more three-day weekends for laborers (but really to try to reduce the number of employees that would call in sick on a Friday after a Thursday holiday).

The holiday would now occur the third Monday of every February, conveniently falling between Washington’s February 22nd birthday and Lincoln’s February 12th birthday. For this reason, many people started calling it Presidents’ Day.

The holiday is still officially listed as Washington’s Birthday, but most Americans recognize it as Presidents’ Day and celebrate any or all of the former American presidents.

What to do on Presidents’ Day?

So, you actually get this day off of work: how do you celebrate Presidents’ Day? There are no fireworks like Independence Day or New Year’s Day. There aren’t any cook outs like Memorial Day or Labor Day.

By the middle of February, most people have given up on their New Year’s resolutions and are sick of winter weather. A day off is nice but what are you supposed to do in the middle of winter?

A few ideas for how to enjoy your unusual day off:

1. Visit a former president’s home and see how they lived outside of the spotlight.

There is a surprising variety of backgrounds: rich, poor, young, old. However, geographically the presidents are decidedly skewed to the eastern half of the US, so this may be more difficult for those of you who live in the western half.

2. Use the three-day weekend for a mini-getaway.

The perfect excuse for a short trip! This holiday also sometimes lines up with Valentine’s Day. Go get cozy in a cabin with your sweetie!

3. Take a mental health day and do whatever makes you happy.

Binge watch a favorite show. Read a book. Go outside. Stay inside. The key is “whatever makes you happy.”

4. Get a head start on spring cleaning.

Some of you are happiest when organized and actually like to clean. You do you! Get organized and get ready for spring and warmer weather!

5. Go on a dream-cation and plan your next vacation.

Take the day to research your next dream trip and estimate a rough cost. Once you have a cost, create a plan to save for that dream trip!

There are many presidential birthplaces, homes, farms, ranches, and libraries to visit, but they are concentrated in the eastern half of the US.

Instead of sorting by location, let’s stick with presidents everyone knows (not counting modern era). Check out the homes of these 7 most famous and influential American presidents.

Everybody knows George! “Here comes the General!” (you sang that correctly in your head, didn’t you?)

George Washington’s beloved Virginia home, Mount Vernon is just south of Washington, DC on the Potomac River. This is a great day trip option from DC, where you can return at night to see the Washington Monument lit up at night.

This being Washington’s Birthday (observed), admission is free on Presidents’ Day but regular general admission fees apply every other day.

Several special tours are available for an additional fee. The Enslaved People of Mount Vernon tour is free of charge but still requires a timed ticket reservation. Count me in for the National Treasure tour! (my movie nerd is showing…)

Members get first dibs at tickets, and what’s left becomes available to the public to be reserved online a few days before the holiday. Mansion tours require a timed ticket, available on-site day of, on first come, first served basis.

Discover the Virginia mountaintop home of Thomas Jefferson. Yes, another Virginian. It was a whole thing.

Jefferson enjoyed experimenting with botany, creating his own unique flowers and vegetables.

The third president also enjoyed architecture and was continually redesigning his home throughout his life. See Jefferson’s home with many of his original possessions on display.

The grounds are beautiful in all seasons, and additional special tours are available discussing topics like Slavery at Monticello, The Hemings Family, and the Gardens & Grounds. Don’t miss a Behind-the-Scenes Tour of the house so you can visit the upper floors and iconic dome!

A simple log cabin in Kentucky is where Abraham Lincoln was born in 1809. Indiana claims Lincoln’s boyhood home, and Illinois claims Lincoln’s adulthood and propulsion into politics. But the backwoods of Kentucky will always be Abe Lincoln’s birthplace.

President Lincoln is the quintessential American story: humble frontier beginnings, unafraid of work, put himself through law school, got into politics, and became President of the United States at the most divisive time in American history.

While the log cabin at this original Lincoln memorial site is not the original Lincoln family log cabin, it’s still an important site to visit to truly appreciate the humble beginnings of one of America’s greatest presidents.

The first father-son pair of presidents: John Adams and John Quincy Adams (2nd & 6th, respectively) were born in different homes but on the same farm. The two homes are right next to each other in Adams National Historical Park in Quincy, Massachusetts.

Guided tours of both birthplaces are included in general admission to the park, but a timed ticket is still required. Start at the Visitor Center to get your timed tour tickets.

Quincy is no longer the farmland the Adams’ knew, so leave your car parked at the Visitor Center and use the complimentary NPS shuttle to navigate around the park. Both Adams-es were pretty extraordinary people and worth getting to know better.

Note for Presidents’ Day 2022: The Grounds are open but the houses and shuttles are closed until May 2022.

Just north of Poughkeepsie, in Hyde Park, New York on the Hudson River is the Home of Franklin D. Roosevelt National Historic Site. Springwood was the birthplace and home of FDR, but this site also includes his Presidential Library and Museum as well as Franklin and Eleanor Roosevelt’s graves.

Springwood is maintained today by the National Park Service, but the Presidential Library and Museum is operated by the National Archives. Purchase a joint ticket at the Visitor Center and you can see both.

Pro Tip: Start with Springwood. The Presidential Library and Museum portion of your ticket is good for two consecutive days, and you can always return tomorrow if you run out of time.

The gardens and grounds are free to explore. You’ll find the gravesite memorial in the Rose Garden.

Springwood was a bit smaller and humbler when Franklin was born there, but after his father’s death Franklin had the home renovated and expanded to accommodate both his mother and his wife and growing family. Preservation efforts maintain the home as it would have been in the 1940’s with FDR’s original possessions.

Roosevelt hosted many political guests and foreign dignitaries at Springwood. Winston Churchill visited several times, and even King George VI and Queen Elizabeth stayed once. You’re walking in their footsteps as you stroll through the gardens!

Note for Presidents’ Day 2022: All buildings require face masks, regardless of vaccination status. Reserving tickets online ahead of your visit is required.

(Don’t confuse the Hyde Park (Franklin) Roosevelts with the Oyster Bay (Teddy) Roosevelts. Theodore is the elder. The two presidents are actually 5th cousins, and Eleanor Roosevelt was Teddy’s niece.)

Theodore Roosevelt was actually born and raised in a townhouse in NYC, which you can also tour, not far from today’s Flatiron Building. Sagamore Hill, however, better reflects the President as the man most people recognize.

TR’s study at Sagamore Hill is decorated with various hunting trophies and skins from his trips around the world. He made himself into the burly, boisterous man that became President. Teddy was a sickly kid. Happy, but utterly determined to remake himself into a healthy adult, which he did.

Sagamore Hill is in beautiful Oyster Bay, on the north side of Long Island, a good way to spend a day away from NYC. Get gorgeous views up on the hill above Long Island Sound, and hike down to the beach on Cold Spring Harbor!

Note for Presidents’ Day 2022:House open with advance reservations only. Face masks required regardless of vaccination status in all buildings.

Just outside of Nashville, Tennessee is Andrew Jackson’s home: The Hermitage.

Jackson was a tough, no-nonsense soldier and politician. He was lauded as the people’s president for being more down to earth than his predecessors, but typical for his time period, “the people” didn’t really mean everyone.

The Hermitage is a bit of a misnomer for Jackson’s home. This is no tiny hovel; this is a proper gentleman’s manor home. It may have had humble beginnings, but it didn’t stay that way very long. Tour the home for a glimpse into our 7th president’s life.

Continue around the grounds to explore the enslaved people’s homes and their way of life on the farm. Many were devoted to the Jackson family even after emancipation, living out their lives on the estate and even buried in the estate’s cemetery near the President and his wife.

Note for Presidents’ Day 2022: Face masks are recommended inside buildings and on tours. The gallery is still closed but the House, grounds, and all tours are open. 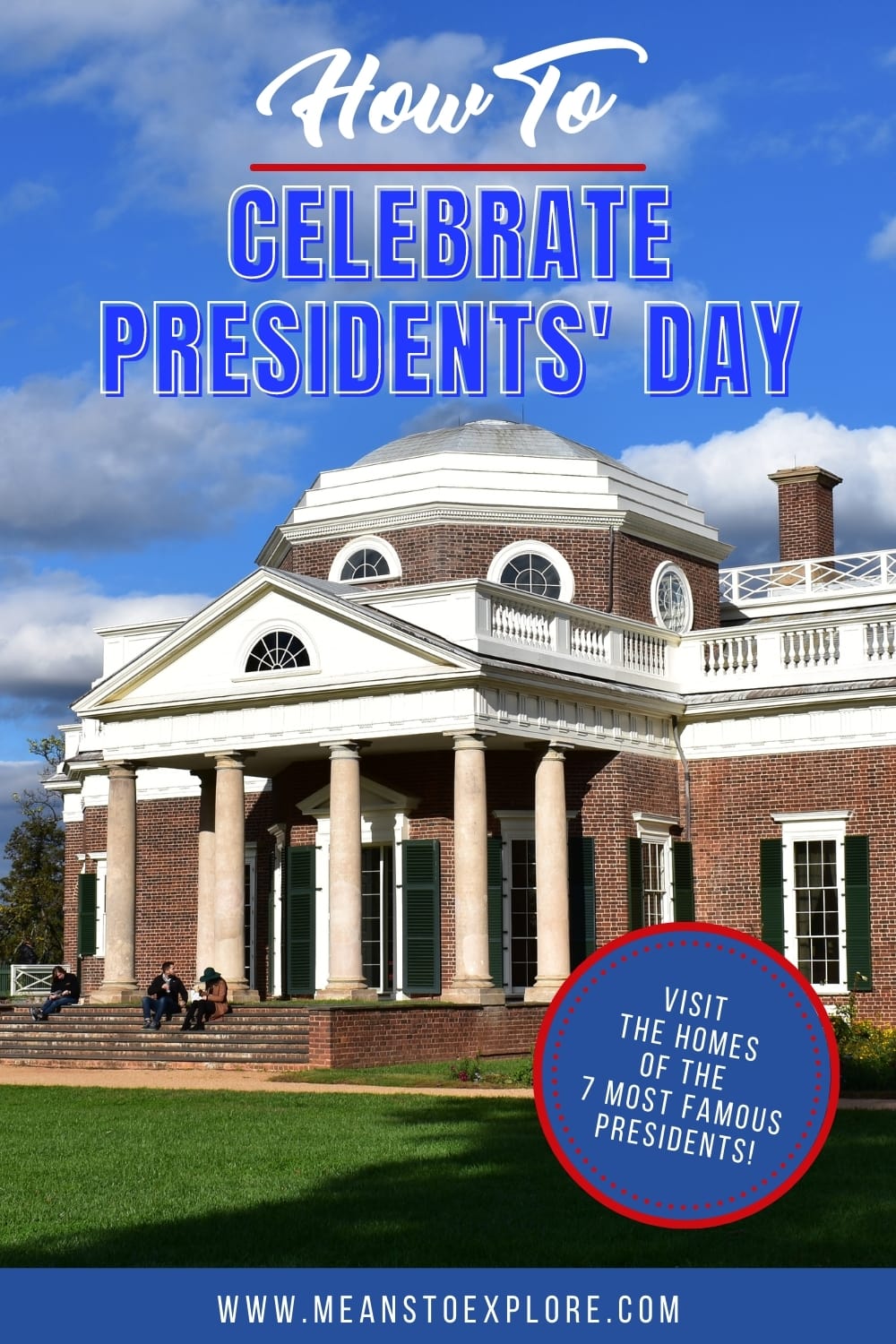 Where to Stay Between Zion and Bryce Canyon National Parks

7 Important Tips to Know Before You Go to St Croix

Enjoy Mesmerizing Monuments at Night in Washington, DC: The Ultimate Guide + How To