The Battle of Gettysburg was a pivotal turning point in the American Civil War. Known as the High Water Mark of the Rebellion, the bloody battle lasted for three intense days and forever put the small town of Gettysburg, Pennsylvania on history’s map. Take a self-guided, free Gettysburg driving tour today and see the battlefield where brother fought brother for the future of America.

Experience Gettysburg in One Day with a Self-guided Driving Tour

The town of Gettysburg has not ignored its place in American history; the town’s civil war battlefield history industry is thriving.

Honestly, it can be a bit overwhelming when planning your first visit to Gettysburg.

Not only is the battlefield a National Military Park encompassing 6000 acres, but the town itself also has museums and historical homes and tour companies around every corner.

If you only have one day in Gettysburg, opt for a self-guided auto tour of the battlefield. It’s FREE and can be tailored to your individual time needs!

How to Day Trip to Gettysburg Battlefield

Gettysburg, PA is an easy day trip from several states as well as from the US’s capital city of Washington, DC. Any of the following are good starting points for a day trip to Gettysburg, or it makes a great one day stop on an eastern US road trip.

Personally, I’m willing to drive 2-3 hours each way for a day trip or even up to 4 hours if it’s a place I really want to go and/or I’m not likely to be in the area again for a while.

Some of you shudder at the thought of being in the car for 3 hours total, let alone one way. That’s fine.

Turn a day trip into an overnight trip. Drive up the night before or stay the night after to give yourself enough time to appreciate all the Gettysburg National Military Park has to offer.

Or, perhaps you need a weekend trip to make the most of your time at Gettysburg! Everyone gets 24 hours in a day. It’s up to you how you divide that time between sleeping, driving, and exploring. 😉

How Long Does It Take to Drive the Gettysburg Battlefield?

During non-peak season, a Gettysburg auto tour takes about 2 hours with only a couple quick stops to get out of the car.

If you prefer to get out and take a lot of pictures and read all the exhibit plaques, it’ll take 3-4 hours, or longer, with stops at all 16 waypoints and at Barlow Knoll, Culp’s Hill, and the National Cemetery.

Our first trip to Gettysburg was November 2020, so crowds were low, as we had hoped.

I’m a huge history buff, so we read the map and exhibit plaques, watched the virtual tour video for each auto tour stop, and got out to take ALL the pictures.

All told, it took us about 5 hours to complete the entire battlefield auto tour loop.

It was a very thorough first visit to Gettysburg, and did I mention it was completely FREE! 😎

All bets are off during peak season, generally May to October but especially in early July around the anniversary of the battle.

Gettysburg National Military Park hosts over a million visitors to the battlefield each year, and the majority visit during the summer months.

Best advice: leave buffer in your time table for your day trip to Gettysburg.

Pro Tip: The anniversary of the battle is July 1-3 so the Independence Day holiday is always a particularly busy time.

Where to Start the Gettysburg Auto Tour

A self-guided auto tour covers all areas of the battlefield in more or less chronological order, from beginning to end of the battle.

Start at the national park visitor center and pick up a free map with the driving tour directions clearly marked.

The visitor center also has a museum, cyclorama painting, and historic film offered by The Gettysburg Foundation for a fee, if you’re interested in learning all the history ahead of your driving tour.

The map is invaluable throughout the day as it also has the restrooms marked! 😆

Car tour CDs and books abound, or you could purchase a guided bus tour or personalized guided driving tour at the visitor center, but the national park service website for Gettysburg National Military Park has a free virtual tour that corresponds to each stop of the battlefield car tour.

These national park ranger-narrated videos are typically 2-3 minutes, with a few longer ones, and walk through the Battle of Gettysburg as you progress from stop to stop. These videos are like having your own personal park ranger in the car with you, and it doesn’t cost a dime!

This is also a great way to visit Gettysburg virtually when you can’t travel!

Is the Gettysburg Self-Guided Driving Tour Easy to Follow?

Yes. The free maps have directional arrows and the roads are marked with signs throughout. Each driving tour stop has its own numbered marker.

Roads for the Gettysburg driving tour route are mostly one-way.

Once you start down West Confederate Avenue and into McMillan Woods on Seminary Ridge to Stop #4, there are very few options to get out of the one-way traffic loop until you get to Stop #12 in the middle of Cemetery Ridge.

Remember, there are restrooms available along the route but how fast you can get there is at the mercy of the cars in front of you. Don’t wait until it’s an emergency! 😅

Use the official map from the Gettysburg Visitor Center when you’re driving around the battlefield. The map below is only for reference while you’re reading this article.

Map courtesy of Wanderlog, an itinerary planner on iOS and Android

Driving Tour Waypoints at Gettysburg: A Journey in Pictures!

The Gettysburg car tour includes 16 stops that walk you through the geography and timeline of the battle.

Dedicated by President Franklin D. Roosevelt on July 3, 1938, the 75th anniversary of the Battle of Gettysburg, this memorial symbolizes the unity of a once divided nation.

The base is Maine granite and the column is Alabama limestone, topped by an eternal flame. A quarter million people attended the dedication, including many of the last Civil War veterans, both Union and Confederate.

Climb the observation tower for a panoramic view of this portion of the battlefield.

This area doesn’t have a numbered waypoint marker, but it is part of the official driving tour.

One in four of every Confederate soldier killed at the Battle of Gettysburg was a North Carolinian.

Confederate General Robert E. Lee sits atop his favorite horse on the top of this memorial, but this memorial is also meant to remember the everyday Virginian sons that fought and died here at Gettysburg. The picture below is the portion of the monument dedicated to them.

However, at Gettysburg, Longstreet disagreed with Lee’s strategy and reluctantly carried out orders, asking for a reassignment after the battle.

The Confederates spent most of the second day of the battle trying to outflank the Union troops dug in on the high ground at Cemetery Ridge. Warfield Ridge was the launching point for the fight over Little Round Top.

Chief Engineer of the Army of the Potomac Warren came to Little Round Top to find it unoccupied and a gaping hole in the Union’s flank.

His quick action in diverting troops to this location just in time to repel a Confederate flanking movement likely saved the outcome of the battle for the Union.

Remember, this area was largely farm fields at the time of this battle. Soldiers were fighting in and around fields and orchards and peoples’ homes and barns.

All together there are over 1300 monuments and memorials preserved at Gettysburg, making it one of the largest collections of outdoor sculpture in the world.

The Pennsylvania Memorial lists every Pennsylvania solider, from private to general, who fought at Gettysburg. It is the largest monument in the park.

Confederates repeatedly tried to flank the Union forces on Cemetery Ridge. This spring was controlled by both armies at different points throughout the battle.

Pickett’s Charge on July 3rd, 1863 saw 12,000 Confederate soldiers charge across an open field and uphill to try to dislodge the Union forces on Cemetery Ridge.

Decimated by Union artillery, the Confederates managed to briefly breach the low stone wall at The Angle but were unable to hold the position and eventually fell back to cover at Seminary Ridge before withdrawing completely.

This area is known as the High Water Mark of the Confederacy because it’s the furthest north the Confederate army ever reached.

After the Battle at Gettysburg, General Lee withdrew his forces and his northern campaign for the Army of Northern Virginia ended.

The aftermath of the battle was horrendous. Where do you bury that many people at one time? The summer heat and fears of disease meant most were hastily buried in shallow graves across the farm fields where they fell.

The governor of Pennsylvania quickly heeded the call from Gettysburg residents to establish a central cemetery.

Land was purchased by the state of Pennsylvania and thousands of Union soldiers were exhumed from their hasty graves and reburied with proper grave markers at the newly created National Cemetery on the ridge they had died to protect.

The Confederate graves were mostly relocated to southern states’ cemeteries in the decade after the end of the war. However, a few still remain in Gettysburg.

The national cemetery also has a monument to President Abraham Lincoln and features a bust in the center and the words of his Gettysburg Address inscribed in the stone behind him.

Lincoln did not give the speech at this site, but the brick stage across from his monument has been used by many Presidents since to give speeches.

Other Things to Do at Gettysburg National Military Park

There is so much to do at Gettysburg, but with one day to spare a self-guided driving tour is a great option!

Have more time to spend in Gettysburg? You could:

Looking for other things to do near Gettysburg? 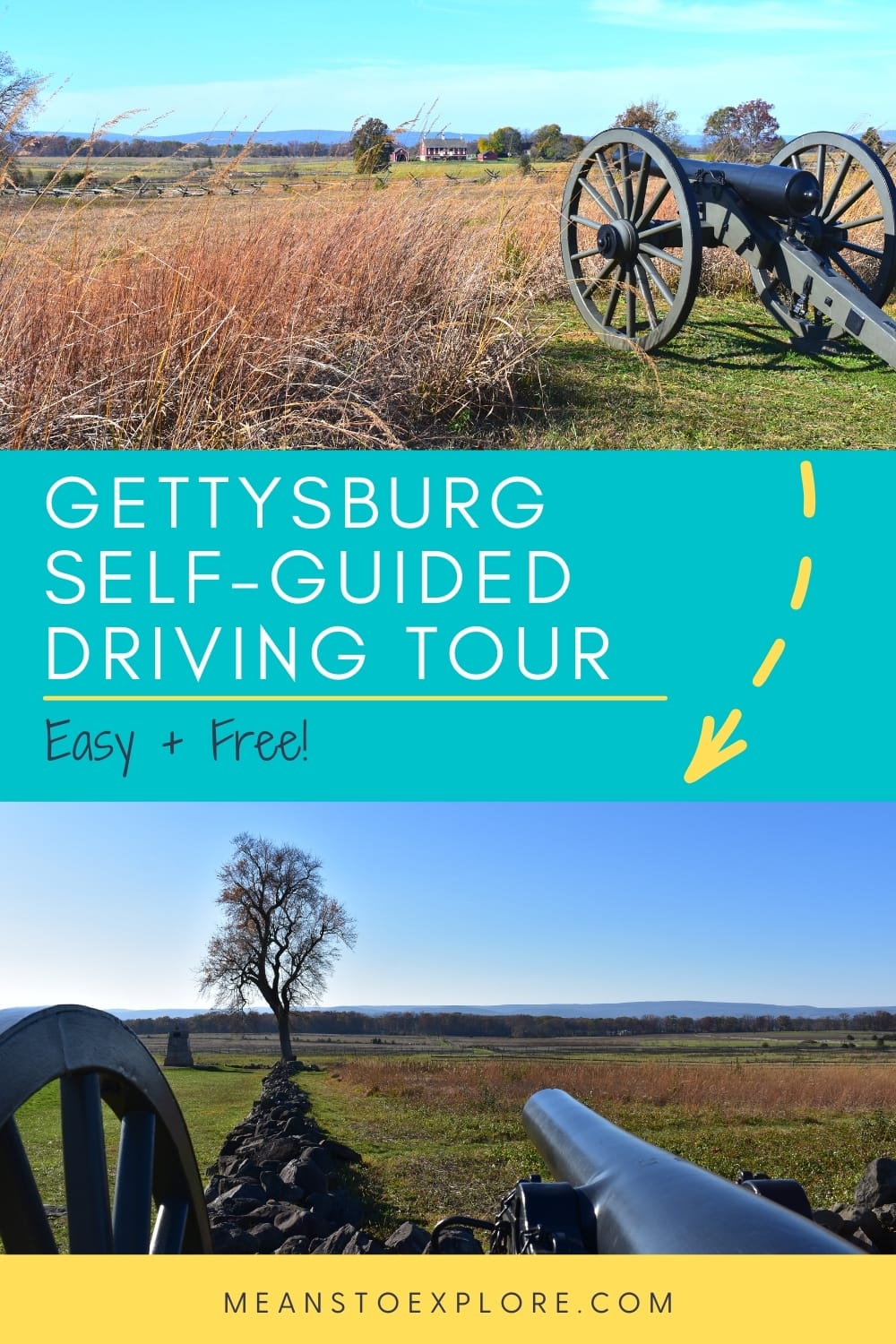 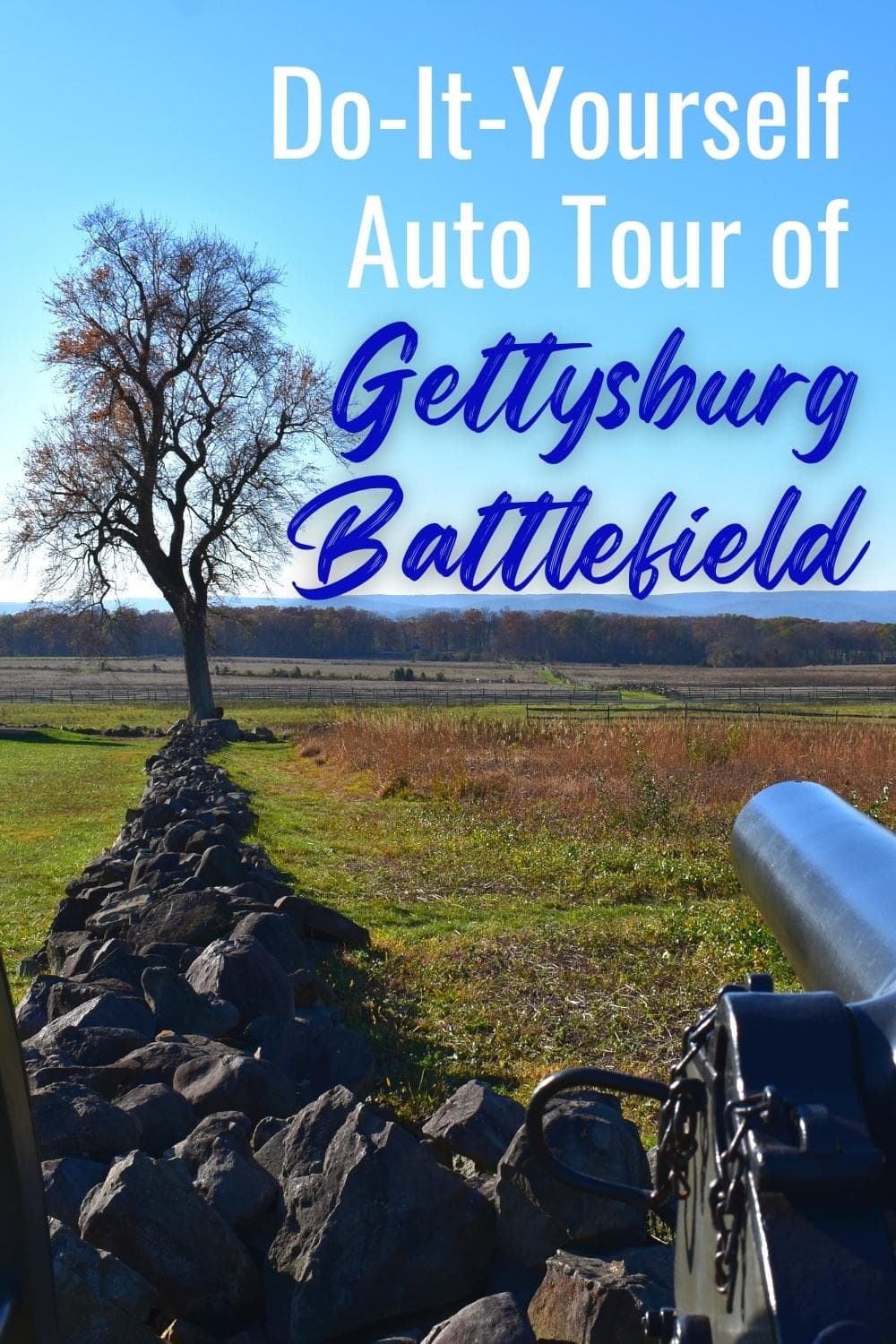 Hiking Trails in Congaree National Park: Which is Best for Your Fitness Level?